Striving to create balance in the way I eat, move & live every day.

Yesterday I was thrilled & shocked to be announced as the winner of the 1st Challenge of Project Tasteless: Naked Chef… 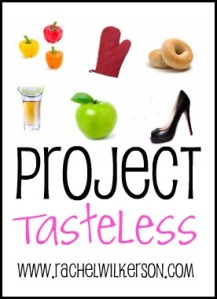 …especially after losing it over the witty Bareass Contessa, drooling over Carolyn’s swirls [how did she do that so beautifully?!] & the “world’s best cookies” [her jogger/minimalist style matches my own when not “baring all”], totally getting Dori’s “weird” combination & adoring her coy seductiveness & developing a secret not-so-secret blog crush [I think it was the boots — & the pretty L.rolls — what can I say? she’s “classy” & sexy].

& if you “wanted” to participate & used the but-I-don’t-have-an-apron-excuse, you’ve just been owned by this truly skilled [with a cookie sheet] truly naked chef & this “saucey whore” [I had such a difficult time typing that].

From cleverly hijacking a parent’s kitchen to salvaging cupcakes in this too-cute-to-be-an-apron apron to “taking it off” for pumpkin manicotti to cute & saucy Eunice & her Purivian Ceviche [mmm, it’s been so too long since I had tilapia], ALL of the entries were FANTASTIC.

You’ll really want to check out ALL of the participants — & check them out you will. 😉

Starting off on a high note, the day could only stay there.

After intense bouldering near Prescott, coming home — famished — to homemade ravioli a la Christine was to die for & just the [re]fuel our bodies needed.

An expert at cooking mushrooms, her three-mushroom blend of shiitake, button & baby ports in white wine reduction was perfection: soft, yet with substance & no where near the realm of rubbery — it was better than many mushroom dishes I have had at restaurants.

Combined with Vegan Dad’s Tofu Ricotta, the filling was delicious & offered the perfect combination of textures to the pasta. 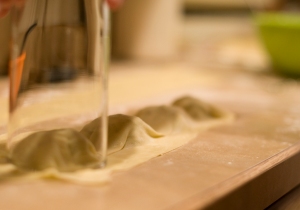 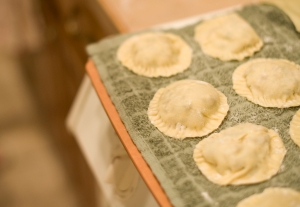 & it’s the first time she has made pasta, if you can believe it — & she decided to go with ravioli!  Props to Christine. 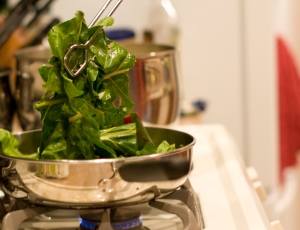 Another Vegan Dad winner [she used earth balance instead of margarine]; this is an amazing base need not stay with pasta only: an adventurous pizza anyone? how about a fun enchilada sauce?

It was delicious & the roasted peppers were distinct, but it needed just a little something…

After tweaking it a bit over the stove after dinner…adding a touch of sea salt, 1 – 2 tsp red pepper flakes, a dash of mirin cooking wine & some oregano [I actually used a pasta toss blend with oregano, basil, sun-dried tomatoes & garlic, but think simply oregano would do the trick] it had a much fuller bodied flavor.

Have you ever made homemade pasta?

I find it a bit intimidating & cumbersome [& we don’t have pasta all that often], but this was definitely well worth Christine’s hard work. 😉

You are currently browsing entries tagged with ravioli at ARoadMoreBalanced.