Striving to create balance in the way I eat, move & live every day.

Partner moves are great because you can push each other — plus you always want your part to be over.  This move was no different.  As the sets progressed, we did not want to hold the squat any longer than necessary; as our muscles fatigued, an explosive burpee became nearly impossible.

We liked this so much, we had to share it with you!  Even if other people have done this, I am giving Dave major credit for an awesome move.

Allie: begin in squat with legs  at 90*, holding medicine ball in front of chest.

Dave: do a burpee, jumping/returning into a squat position:

[burpee: squat & bring hands to ground – jump feet back into a plank position – do a push up, exploding as you push up, popping into the squat position.] 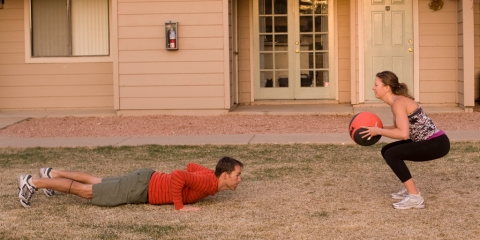 Allie: throw the ball to Dave as he lands in the squat. 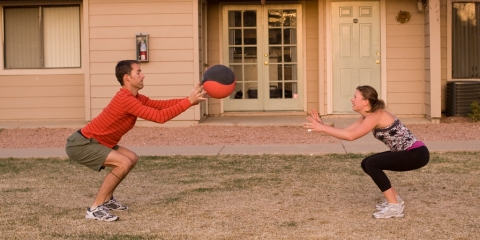 [try to keep your head in line; my form is not great here]

jump back into squat position.

Continue alternating moves between partners for duration of time or reps.

Your quads will love you.

Thursday morning we met a couple people at the gym & did a group workout:

I hope it was worth the wait, because last night I did not feel like changing  into workout clothes & sweating to burpees, just  to get dressed again.

There was pizza waiting after all!

So we got up bright & early to show you our burpees before hitting the crag in Jack’s [a.k.a. rock climbing in Jack’s Canyon].

Hope you are enjoying an active weekend as well!

You are currently reading Hold & Explode! at ARoadMoreBalanced.